Gen Monks shield your eyes, because Lightning Hydra Wizard is coming to town. 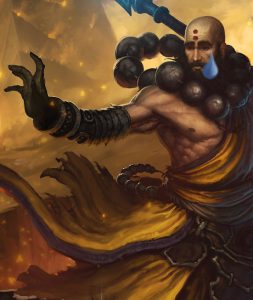 After our last video, we received a ton of positive feedback from viewers, but many were concerned with our overall paragon and gear levels.

Thankfully, Blizzard gives us the option to nerf ourselves, so we went back into the D3 PTR and put the Lightning Hydra Wizard through its paces.

We did what you asked: We stripped off our good gear; we pulled our paragon points; and removed all but 2 Caldesann’s Augments. We have no primal ancients.

Is it easier to clear a rift with 14,000 more Intellect? Obviously. Is it still possible to do high greater rift’s with 800 paragon and no augs? Absolutely.

But we are men. Tough, internet gaming, men. A little paragon challenge never scared us.

In our video you will find a more in depth breakdown of our gear and paragon, as well as how it plays out.

Greater Rift 90 was a joke. We cleared it in 1 rift in less-than-optimal conditions. You will also see us ramp it up a bit, and come within seconds of clearing a GR95.

We learned a lot during our tests. Should the build remain intact for Season 10:

While this build with hydras is not massively different than the current Lightning Wizard, it does play different. Positioning of hydras become important, as not only are they very stupid creatures, they benefit from Zei’s Stone of Vengeance gem.

In all honestly, you could have me run in a rift naked, auto-attacking mobs with my bleeding fingernails.. and I would still be happier than what we have now.

Any change to the meta is a good thing, as it challenges players to use new spells, different gear, and alter their playstyle.

Finally, while it is true that this build looks very powerful, the elephant in the room has to be Firebats Witch Doctors doing 10x the damage of any other build in the game.

Look for a future video about firebats damage, and why it is ruining the game, but  in the meantime please enjoy our video below. As always, let us know what we did wrong or right, and for more info check out Zhanji’s post.

You can discuss this information over at Reddit, and as always if you missed the original article/videos, you can always check the archives: